Why God Can Do Your Resolutions Better Than You 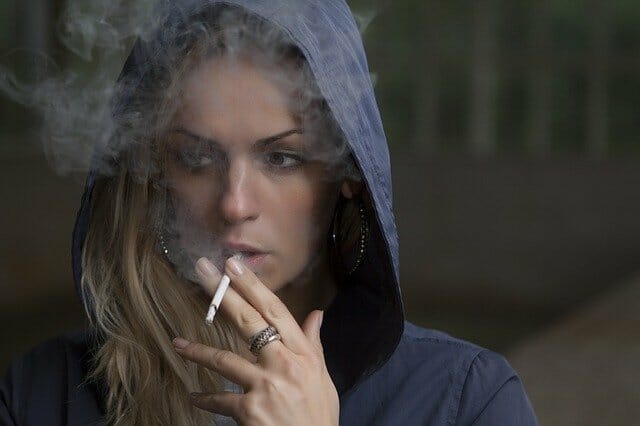 Spoiler alert! The moral of this blog is not to advise you to ask God for help before making your resolutions. That’s a no-brainer. The point is to show you, from first-hand experience, just how much better God can “do” our resolutions.

I learned this vital lesson years ago, when I was just coming back to the Church. I was in the throes of that “first blush” of faith and truly believed that I would do anything for God – even die for Him (in spite of the fact that I was still too embarrassed to tell a single friend that I had returned to Mass).

But I didn’t see any of these glaring inconsistencies in myself and decided that my New Year’s Resolution for that year would be to quit my 20- year habit of smoking. Mind you, I was a two-pack-a-day smoker (Marlboro red box) who couldn’t sit through a movie without going outside for a smoke. But because I thought that God would want me to quit this dirty habit, I set my mind to quitting for Him.

The search for methods wasn’t too complicated because the only options available at the time were Nicorette gum and a patch. I opted to try Nicorette and my doctor was only too happy to prescribe it. “Now remember, Sue, no smoking while you’re chewing this gum!” he warned.

The next day, I woke up, lit a cigarette, and read the directions. It didn’t seem too difficult. When the next urge hit, I popped a piece of gum in my mouth and chewed it SLOWLY like it said on the box. It tasted like burnt rubber. I spit it out and lit a cigarette.

I kept trying the Nicorette and it did next to nothing to curb my cravings so I gave up on it and returned to the doctor.

“Let’s try the patch,” he suggested, and I was only too eager. “Now remember, once you put this on, no more smoking! It’s very dangerous to smoke while wearing the patch.”

This scared me. I spent the night smoking my brains out while reading the warnings on the package insert. The next morning, I took a deep breath and slapped the patch on my arm.

An hour later, the old craving for a smoke returned. I started sweating, my jaw grew tense, my tongue started to swell – the whole withdrawal thing.

“It’s very dangerous to smoke while wearing the patch!” I remembered the doctor saying.

Yes, but he didn’t say anything about Nicorette, did he? I tossed a piece of burnt rubber in my mouth and chewed SLOWLY until the pangs subsided . . . a little.

As the day wore on, it got harder and harder. The withdrawal was so bad I could hardly concentrate on my work. As soon as I got in the car at the end of the day, I was so delirious I was willing to risk instant death for a cigarette. I lit a smoke and, thanks be to God, didn’t die on the spot.

For the next few days I alternated between chewing Nicorette, smoking, and wearing the patch. The constant withdrawal was wearing me down. I found myself standing downwind of folks who were smoking, hoping I could get some relief from inhaling their second-hand smoke. Because the doctor said don’t smoke on the patch, when the Nicorette didn’t work, I’d pick an old butt out of the ashtray and smoke it, thinking it wasn’t a whole cigarette so I should be okay.

On a particularly bad day when I hit a traffic jam on the way to work, finally got into the office to find my boss pacing beside my desk, and the phone was already ringing off the hook. On top of all that, I was in the throes of another withdrawal attack. “Enough!” I decided. “I’m smoking today.” And I did so, even while wearing the patch and chewing Nicorette. Technically, I should have died that day.

At 5:00, I drove home, pulled into the parking lot of the local 7-11 for a pack of smokes and suddenly realized what I was doing. “Sue, you’re wearing a patch, chewing Nicorette and smoking all at the same time – and none of it is working. What’s wrong with you?”

I knew exactly what was wrong and it was time to face it. I was unable to quit smoking. I just couldn’t do it. It was too hard.

Looking up at the sky (because I still thought that’s where the Lord lived) I prayed, “Lord, I can’t do this. I can’t keep my promise. I really want to, but it’s just too hard. I’m sorry.”

Little did I know at the time, but my self-reliance was the plug that was stuck in the dike, preventing the flood of grace that God wanted to send me to help me quit smoking. Once I admitted defeat, grace took over, although it was so subtle, I only saw it in hindsight.

Over the next few months, I found myself cutting back on the nicotine level of cigarettes that I smoked. I went from Marlboro red-box to Marlboro Light and then on to brands that no one ever heard of. Eventually, I found a one milligram cigarette that tasted like I was smoking recycled cardboard but, hey, it was a smoke!

One day I realized the cravings weren’t so bad anymore because I was now weaned to a fraction of the nicotine that I had been imbibing. Even though I didn’t see His hand in this yet, I prayed, “Lord, I think this is working!”

Not long after this, while getting ready for work one morning, I reached for a cigarette just as a very pronounced thought suddenly rushed through my head, “You don’t need them anymore.”

I wondered where the thought came from. It was so out-of-the-blue. Was it the Lord? Testing it, I stubbed out the cigarette and it wasn’t until I reached the office an hour later that I realized I hadn’t smoked.

Hmm. Was He behind all this? Out of nowhere, I got the urge to pray the Divine Mercy chapel as often as possible for the purpose of beating any spirits of addiction that might be adding to my difficulty in quitting the habit.

Excited now, with the prospect of the success becoming more and more real, I prayed that chaplet like never before!

And then one day, I reached for a cigarette and realized there was no real craving for it. “So why am I smoking this?” I asked no one in particular.

A word rushed through my mind. “Habit.”

Yes! Of course! I decided to quit lighting a smoke when I woke up, after dinner, when I got in the car.

Weeks went by. I was smoking less and less. Maybe 3 or 4 cigarettes a day.

Finally, one day, while waiting for Mass to begin, another one of those very pronounced “thoughts” came out of nowhere and went screeching through my head. “Every time you smoke one, it hurts me.”

What? Hurts you? Don’t tell me that!

I panicked. Maybe it was just my imagination.

But deep inside, a cold hard fact rose up and hit me square between the eyes.

Sue, you’re so over this smoking thing. Just let go.

I got home after Mass and there was my friendly neighbor, hanging over the fence, grinning at me and ready to share the latest neighborhood scoop. Reaching in my purse, I pulled out a cigarette, lit it, took a puff, then heard those words once again, “Every time you smoke one, it hurts me.”

I dropped the cigarette, crushed it into the ground, and never smoked again.

There are several valuable lessons hidden in this story. Of course, I should have asked the Lord first if He wanted me to quit smoking. Maybe it wasn’t the top thing on His list at the time. I had a lot more than smoking to clean up.

Even more important, I learned that the place to start before making such a resolution was to humbly confront my own weakness and the reasons why I needed to make this resolution in the first place. Besides being addicted to nicotine, I was also weak and irresolute – not exactly a winning combination.

Last, and more importantly, after accepting the formidable odds stacked against me, I should have stepped aside and let God lead me. After all, He knew that I didn’t have the stamina to quit cold-turkey with nothing but a few nicotine withdrawal aids. He also knew that my plan was based on an inflated view of myself and my own abilities, which is why it ended in failure.

Once I got out of His way, He put into effect a plan that was expertly suited to my weaknesses. Instead of struggling with harsh withdrawal pangs that were too much for my weak constitution, He secretly guided me into a gentler and more gradual withdrawal that took place over the course of a few months and was not nearly as painful for me. When I needed guidance, He was right there with those “thoughts” that seemed to come out nowhere (which I later learned were a typical way that God communicates with His children known as “infusions of knowledge”). Because there was a spiritual component to my habit that I didn’t know about yet – spirits of addiction who were aggravating the process – He had me pray the Chaplet of Mercy. I never would have thought of all this myself even though I honestly believed the whole thing was my idea until the very end when it became obvious Who was in charge.

The moral of this story is that when it comes to resolutions, we humans are much better at making them than keeping them.

Regardless of the resolutions you are making for the coming year, take a long look at whatever it is that is making you procrastinate, eat too much, neglect your physical health, etc., and bring that weakness to the Lord. Ask Him to create a plan for you to accomplish your goal and conquer your weakness – if it’s His will – and then pray for the grace to let Him lead the way.

With God, all things really are possible.