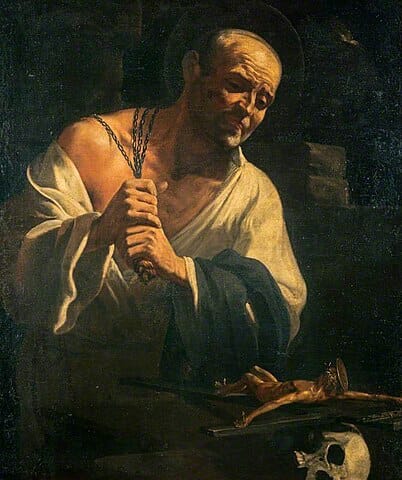 For years, the adoration chapel at my parish used to put out a little basket full of folded strips of paper on the table during Lent. It was accompanied by a little sign that read: “Pick a Penance.”

Everyone takes one slip each time they visit. There’s to be no cheating and no “throwbacks.” As the sign said, “No fishing. You pick it, you keep it.”

I was expecting all kinds of “fluffy” penances like “hug your kids today” or “say a Hail Mary for souls.”

What did I pick? “Drive no faster than the speed limit this week.”

My first thought was, “What kind of penance is this?”

Just then one of those severely impatient types came up behind me – full speed – in a shiny black Lexus and didn’t stop until he was so close to my back bumper I could see the light on his cell phone.

How humiliating! A seasoned speeder like myself wasn’t used to that kind of treatment.

By the time I got home I was actually sweating.

But the experience told me a lot about myself:

1) I was a chronic speeder

2) I was habitually breaking the law

Believe it or not, I dared to pick a penance every week that Lent and all of them were equally tough. And every penance was accompanied by the virtue it built in the person who was challenged to perform it.

“Don’t look the other way just to keep peace. Speak up for Christ!” – COURAGE

“Pray for someone you hurt and make at least one sacrifice to atone for the pain you caused them.” – JUSTICE

After all these years of Lent, I was finally discovering that penance can be just as effective today as it was thousands of years ago.

Some people call the concept of penance and mortification archaic, but they couldn’t be more wrong. Just ask any athlete. They train, they fast, they submit themselves to grueling schedules and all kinds of harsh disciplines – and for what?

So they can be champions.

And that’s precisely why we do it. When Catholics fast during Lent, it’s not because we’re fanatics who are out of touch with the world. It’s because we know that we can’t be champions of anything unless we first become champions of ourselves.

But this can be harder than you think in our consumerist society where pleasure is considered to be the supreme object of human life – especially in the areas of sexuality and gastronomy.

For example, those who choose to live a celibate lifestyle are thought to be strange and out-of-the-ordinary. I remember the time I went to a new doctor who asked me, “Are you sexually active?” When I said “no” she looked at me quizzically. “Well, do you suffer from depression at all?” she asked. “No, thank God.”

Think about it! My celibate lifestyle is questioned, while those who live a promiscuous lifestyle, racking up all kinds of STDs, unwanted pregnancies and abortions, are considered normal – part of the mainstream.

And experts know it, by the way. They are fully aware of the fact that a person cannot live in a state of constant indulgence and remain healthy.

As Bishop Alberto Cosme do Amaral, Bishop of Fatima, writes in his booklet, Voluntary Mortification Today, “Children who grow up satisfying every whim, who do not know what self-discipline is, or self-control, doing all they want whenever they want, denying themselves nothing, making their own instinct the only supreme norm of their behavior will never become strong personalities, people with backbone. They will spend their lives at the mercy of every wind and storm like ships without direction or without a sail. They will not be towers of strength but simply weathervanes in the wind. Instead of being free people, they are slaves of their lower instincts, of passion, egotism, individualism and comfort.”

This is why the world would be a much better place if all of us – not just Catholics – went back to that good old-fashioned practice of disciplining the body in order to subject it to the higher values of the spirit.

And for those of us who are squeamish at the mere thought, let it be a comfort to know that we don’t need a hairshirt or a flog to do it. There are much more modern ways of disciplining the body that are just as tough.

Why flog yourself when you can try to live simple Christian life while surrounded by every conceivable excess, luxury and comfort. Do we really need heated seats in the car and self-closing drawers in the kitchen?

Those on a limited budget practice Lent every day by resisting the temptation to buy all the gadgets, gimmicks and latest fashions that are blasted at us on TV, on annoying Internet pop-ups, and in every store-front window – SALE! SALE! SALE!

And how can we not need to fast? We’re the most obese nation in the world and is it any wonder why? There’s a fast food restaurant on every street corner – a Big Mac with fries and coke is 1130 calories – that’s what I eat in a day.

For that matter, aren’t we already fasting every time we stand in line at the grocery store – while staring at 17 different varieties of candy bars – and not buy one?

If there’s any doubt in your mind why people need to learn how to curb their gastronomical impulses – visit a supermarket on the day before a snowstorm and check out the carts.

They’re loaded to the gills – and we’re not talking about milk and bread. These people are buying steak, cheddar cheese doritos, and four flavors of ice cream. We can’t get through a snowstorm without this stuff?

Looking at those shopping carts is when you realize that a little bit of mortification might actually be a good thing.

Not long ago, Archbishop José Rodríguez Carballo, secretary of the Congregation for Institutes of Consecrated Life and Societies of Apostolic Life, was commenting on the fact that about 3,000 men and women have left religious orders in the last five years. Vocations are so hard to come by these days. Why is that?

Because we’re living in a market-oriented world where “everything is measured and evaluated according to the utility and profitability, even people” he said.

It is “a world where everything is soft,” where “there is no place for sacrifice, nor for renunciation.”

We’re so engrossed in ourselves and our possessions that we no longer realize that our desires are what’s killing us – not our penances.

“Voluntary bodily mortification is necessary for human equilibrium,” Bishop Amaral writes. “It gives primacy to the spirit, without which man is not truly human. At every step we come across those ruined persons, the sad result of lacking mortification and self-discipline. It is enough to think of the ever-long procession of those who have become victims of drugs, alcohol and sexual excess. In a word, they have fallen prey to multifaceted consumerism and modern permissiveness.”

It is only with voluntary mortification that we can neutralize those deep tendencies within ourselves to be proud, lazy, selfish, greedy, all of which are opposed to human dignity, he says.

All of the above is why we need Lent, we need a time that forces us to practice voluntary mortification. It can only do us good, both as individuals and as a society.

And it might also make some us obey the speed limit.