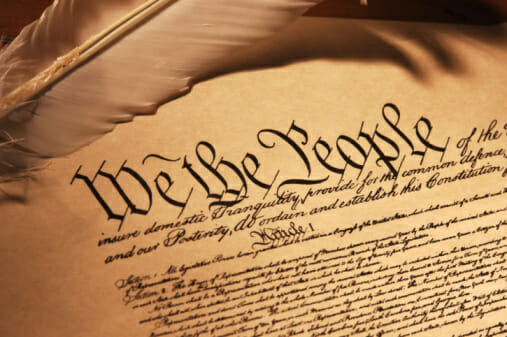 In the same week that the U.S. House took steps to revive the ill-conceived Equal Rights Amendment (ERA) which could be used to add a constitutional right to taxpayer funded abortion, Supreme Court Justice Ruth Bader Ginsburg threw a wet blanket on the prospects of passage by saying she believes the process, which started in 1972, needs to start over.

According to The Daily Signal, Justice Ginsburg made the comments while speaking at an event at the Georgetown University Law Center. She was asked for her thoughts on the effort to revive the Amendment that prohibits discrimination based on sex. A renewed push by feminists inspired by the #MeToo movement resulted in the recent ratification of the last three states needed to reach the 38-state threshold for passage. While it might sound like a slam-dunk, there are a few pesky hurdles that supporters just can’t seem to surmount.

First, the deadline for passage was 1982. Supporters are arguing that the deadline was not binding and that recent efforts to revive the bill should be enough to pass the Amendment. The Justice Department put the kibosh on that argument last month when it issued its finding on the question of whether or not the 1982 deadline is binding.

“Congress has constitutional authority to impose a deadline for ratifying a proposed constitutional amendment,” the finding states. “It exercised this authority when proposing the Equal Rights Amendment and, because three-fourths of the state legislatures did not ratify before the deadline that Congress imposed, the Equal Rights Amendment has failed of adoption and is no longer pending before the States.”

Also standing in the way is the fact that five of the original 35 states that ratified the Amendment have since rescinded their signature. Proponents of the ERA claim the rescissions were invalid and should not be counted.

Justice Ginsburg, a long-time champion of women’s rights, decided to weigh in on the matter and startled supporters when she advised that the ERA process needs to start over – from scratch.

“I would like to see a new beginning,” Ginsburg said at Georgetown. “I’d like it to start over. There’s too much controversy about late-comers.”

She correctly pointed out the difficulty supporters have in convincing the courts that they should recognize overdue ratifications but ignore recensions. “A number of states have withdrawn their ratification,” Ginsburg said. “If you count a late-comer on the plus side, how can you disregard states that said, ‘We’ve changed our minds’?”

Even though gender discrimination has long been illegal in the U.S., the wording of the ERA which says that “equality of rights under the law shall not be denied or abridged by the United States or by any State on account of sex,” is problematic because of how it could be used to actually strip women of rights they now enjoy. For example, it could make them eligible for the draft and strip away alimony and social security benefits for wives and widows. Even more concerning is how some proponents of the ERA believe it could be used to label any attempts to restrict abortion as sex discrimination, which could lead to adding a constitutional right to taxpayer-funded abortion, a prospect that a large majority of Americans, even those who identify as pro-choice, have consistenty opposed.

Ian Millhiser of Vox summed up the probable fate of the ERA very succinctly when he wrote: “Ginsburg’s comments are likely to be the death knell for the ERA. Without Ginsburg’s vote, it’s tough to imagine that five members of the Supreme Court would agree the ERA was properly ratified.

The ERA was ill-conceived in the 1970’s and remains equally untenable in 2020. It’s just not going to work. Time to let it die.