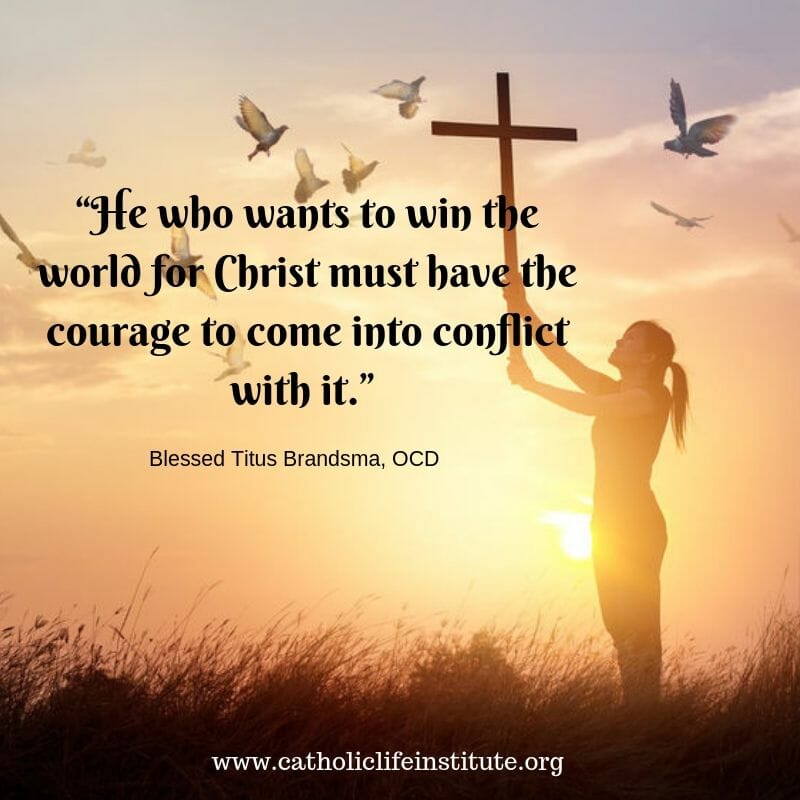 “He who wants to win the world for Christ must have the courage to come into conflict with it.” Blessed Titus Brandsma, OCD

Confrontation with others is not my cup of tea. I was raised in a peaceful Catholic home where my parents never fought in front of us. As a result, we grew up to believe that everyone – even the most annoying people – were to be treated courteously. This is why I now find myself so unprepared for  totally uncivil discourse. I have yet to find my comfort zone.

So does this mean that I can’t win this world for Christ? Is there some way that reluctant people like me can come into conflict with the world in a positive way?

Years ago, when I was undergoing my reversion back to the faith, I was able to let go of it all – the feminism, the boyfriends, the birth control, the foul language – except for one thing. My fear of becoming a “Bible thumper.”

“You’re not making me into a Jesus freak.”

I used to tell him that at least once a week, usually with one of my typical drama-queen declarations – “I’d rather kill myself with a butter knife than turn into a bible thumper.”

All joking aside, the fear of Him changing me into this kind of obnoxious Christian was a real detriment to my spiritual progress in those early years. No way was I ever going there. The mere fear of it kept me from fully surrendering to Him. It took years for Him to get it through my thick skull that He was not asking me to do this for Him, that there were better ways of entering into conflict with the world and professing the Truth than hammering people over the head with it.  He wanted me to be myself, to do it my way.

To follow are some of the tricks He taught me to use when coming into conflict with the world around me.

Our culture is locked in a fierce moral battle – abortion rights, conservative vs. progressive values, marriage wars, gender issues, etc. These are essentially spiritual battles that must be fought with spiritual weapons. I know from having been on the “other side of the fence” that it was only when my mind and heart were opened to the Truth that I began to realize the error in my thinking. Before this happened, my feminist heart was as hard as a rock; but, thanks to the prayer of people I will probably never know, the Lord “softened” my heart and I was able to comprehend a good counter-argument here and there, all of which eventually added up to changing my mind. Regardless of whether we see any results in real-time, our rosaries, our Masses, our novenas, our votive lamps, are changing hearts and souls. We must muster up our faith and use it to keep praying even when we don’t see results.

Let’s face it, in this PC culture where group-think rules and everyone is expected to behave like a pretty pink squishy toy, the example of people who practice what they preach can be very persuasive. Don’t hide the fact that you go to Mass, pray daily, etc. You don’t have to say a word. Just do it.

Find out what truths you both agree on so that, from this common ground, you can lead them to the truths they reject. This is especially true when dealing with people who promote same-sex attraction and those who suffer from gender identity problems. You’re both on the same page – you both genuinely care about persons who suffer with these issues and the unfairness and bullying they often encounter in society. You just differ on how to go about fixing the problem.

I’m not talking about “smarts.” This is more about understanding the person you are addressing. If the person is familiar to you, recall their background – the kind of job they have, their family life, their upbringing, their prejudices, inhibitions, joys and sorrows – all of which influence their way of thinking. By doing this, your choice of words will be guided by compassion and understanding rather than from raw emotion.  As Father Emil Neubert taught in his book, Mary, Queen of Militants, “It is the logic of the heart more than the logic of the mind which moves men. If you understand the heart of the one to whom you speak, how much easier it is to work upon his mind and his will!”

Is the person who is confronting you able to handle the whole truth? Remember, Jesus didn’t reveal everything to His disciples right away because they couldn’t handle it all at once. Chances are, the person who’s challenging you about your faith probably can’t either – otherwise he/she wouldn’t be confronting you! Sometimes it’s better to give them a kernel of the truth rather than the whole cob because they’re just not spiritually mature enough yet to handle it. As we all know, sometimes too much information really is too much information. Know what to say and what not to say.

Cracking jokes is a great way to ease tension. It’s possible to utterly disarm your adversary with a few good-humored quips. For example, my former landlord was forever taunting me about how often I went to church. One day, I finally figured out how to shut him down. “Are you going to church again?” he demanded. “What do you do in church so much?” “Pray for you!” I said with a grin. He had absolutely no idea how to respond and walked away looking thoroughly confused. He never made that comment again!

If you’ve got a great conversion story, tell it! Nothing is more powerful than personal testimony. For example, when someone confronts you about going to Confession, they’re probably expecting a theological argument. Instead, bring it to the experiential level. “Believe it or not, I’ve had some of the most profound healings of my life in that sacrament!” Chances are, they’re not expecting that kind of response!

We can’t all speak for Christ in the same voice. He uses our individual styles to reach certain souls. This is why it’s so important to be true to yourself. If you’re a teaser, tease. If you’re the serious type, be serious. If you’re a goofball, be goofy. Profess the faith in your own way!

Jesus faced a world far worse than ours and, starting out with 13 mostly itinerant fishermen, was eventually able to conquer the whole world – but this took centuries to complete. At the time of the Apostles’ deaths, Christians were being fed to wild beasts for sport or lit on fire to provide “evening lights” for the city of Rome. For a very long time, the Christian faith appeared to be one heck of a spectacular fail, but that never waylaid Jesus’ followers. They kept their eyes on Him and concentrated on the task at hand, doing whatever they could to spread the Truth and it was precisely this kind of patience and perseverance that eventually won the world for Christ. It worked then, and it will work now.

The most important lesson I learned about the call to be a soldier for Christ is to resist the temptation to think I’ve got to change the whole world in one fell swoop. One person will never be able to fix this mess and feeling like it’s all up to us just makes us feel overwhelmed, frustrated and discouraged. Instead, we need to be humble enough to realize our limitations and learn how to work within our means. You might not be able to change it all, but you can change some part of it. Take it one day, one step, one soul at a time. If the apostles could conquer the world one soul at a time, so can we.

The bottom line is that ours is a humble job. We’re servants of a great King who have been given the privilege to work in His vineyard, carefully choosing which grapes to harvest at the right time and plucking them off the vine with just the right touch so as not to destroy the fruit.

For me, the fight for Christ has always boiled down to one thing – love for God and neighbor. If we can focus on this one great command of Christ, everything else will fall into place – and our world will, once again, be His.